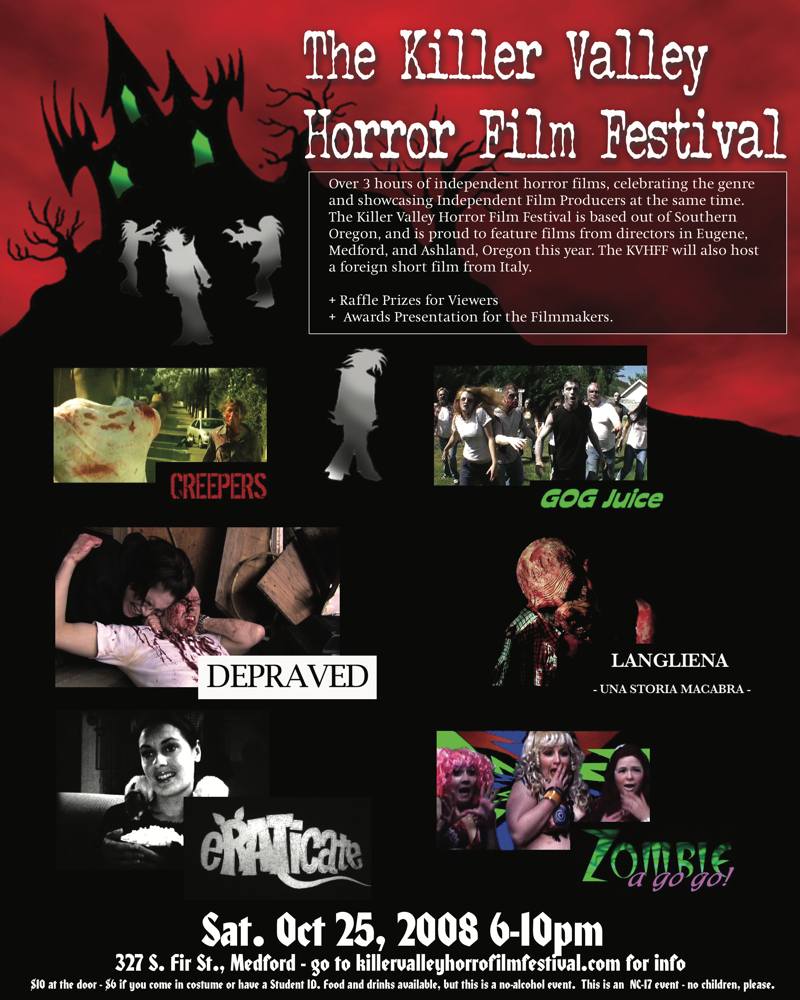 Held at Landmind Studios - Medford, OR

The Creepiest Film Award is an original award created by the KVHFF at their premiere festival in 2007.  This award was inspired by the overwhelminingly similar reactions by film judges to the production “Play With Me” from Director Dan McCloy.  McCloy went on to get the Best Director Award in 2008 for his motion picture “Zombie a Go Go.”  “Zombie a Go Go” pieced together live-action talent with locations and backgrounds animated by McCloy.  The Special Effects (SFX) were the work of Medford-based Morbid Creations.

The 2008 winner for Best SFX Award went to Director Emiliano Ranzani for the atmosphere created by his masterful manipulation of lighting, sound, and pure gore in the short film “Langliena.” “Langliena” was also the KVHFF’s first International Submission, and therefore the first International Award Winner.

“Zombie a Go Go” continued to show off through the evening, as both the Best Actor Award and Best Actress Awardwent to Co-Stars Michael Meyer and Melanie Dahl.  Meyer played the perverse and voodoo-fascinated husband to his resurrected wife, played by Dahl. Dahl’s character, Lorna, couldn’t be more upset to have been brought back from the dead when she had finally ridden herself of the fledgling husband that the audience eventually see in Meyer’s portrayal of Big Daddy Mokumbo Tim.

The coveted Creepiest Film Award went to an independent motion picture out of Eugene, Oregon.  The film, “Depraved,” from director Henry Weintraub follows a young woman as she tries to regain some meaning in her savagely shattered world. A cheating boyfriend leads her away in confusion, only to be hit and paralyzed by a car, abducted by a creepy redneck, sexually assaulted in her paralyzed state, and abandoned. The lead character, Edith, played by Lorien Emmerich, has only one thing on her mind. Revenge. A cameo by Lloyd Kaufman also adds to the creepy depths these filmmakers must have stuped to in making this short feature.

And finally, the motion picture that took home the Best Film Award was a short feature from Ashland, Oregon, “Eraticate.”  This motion picture tells the story of a girl and her cozy relationship with her pet rats.  But when jealousy over time spent with her new boyfriend gets to these neglected pets, they take matters into their own tiny little rat paws.  With creative narration and an original music score, this well-made short had the feel of a horror classic.